OK folks.  Even if you have been blasting by our previous blog posts without reading them, you MUST TAKE THE TIME TO READ THIS ONE!  It will astound.  Really.  I promise.

But, before we get into the ‘astounding part,’ let’s back up just a bit… 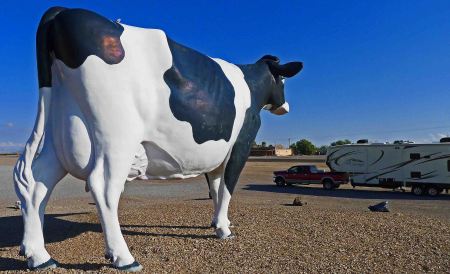 Giant cow, over 150 feet tall (you can tell by the scale of our truck and 5th wheel parked below it) probably affected by CIA Area 51 ‘testing’ in the 1950’s

At the end of the last post, our Heroes were departing Death Valley, heading back past Last Vegas, through Searchlight, Nevada (Harry Reid’s home town) to Bullhead City, Arizona.  A long drive, filled with beautiful desert and city views, that took us close by Area 51 (the CIA’s super-secret pre-and-post cold war Money Pit) and the Air Force Base at Indian Springs – no drones visible, but they were there – we have seen them in the past.  Also home to the USAF Thunderbirds. 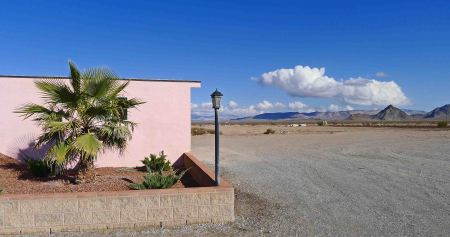 Strange view, near Area 51 in the Nevada Desert. CIA-induced clouds.

Bullhead City sits across the Colorado River (or what’s left of it…) from Laughlin, Nevada.  What one lacks in glitz and neon, the other lacks in Denny’s, Walmart, Home Depot, Lowes Safeway and 15 miles of continuous stoplights.  We had made reservations over the Internet at the Colorado Oasis RV Park, deciding to stay there based on their web site.  Now, we all know that the Internet never – ever – lies.  We knew we were in trouble when we could barely negotiate the entrance.  There were new owners, and their demeanor showed.  Nice, but clueless.  And it got worse.  When we pulled up to our space, our first reaction was ‘No frigg’n way can we get into that.’  Well, we managed it, after about 30 minutes of backing, forwarding, re-backing, dodging buildings, cars, more buildings, etc.  Luckily we had the assistance of 3 other occupants (which can be a blessing or a curse…).  This is a small park, right on the river.  The sandy beach pictured in their web site had long been washed away.  Almost all of the residents were Snowbirds, mainly from Colorado and Idaho, with one or 2 token Canadians.  All super-friendly.  We were immediately welcomed ‘into the flock’ (read: ‘invited to evening cocktail hours’); it was like being with a bunch of old friends.  (And, believe me, this has not always be the case in our travels.)  What a great and unpretentious group!  We were almost sad to leave. 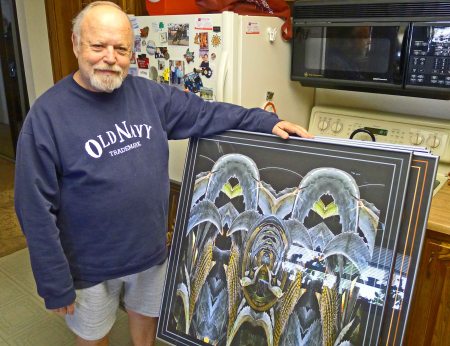 The world famous photographer, John D. Mercer, with one of his most recent pieces

Bob drove down to Needles one day to visit an old ASU graduate school buddy, the world famous John D. Mercer.  John is a very accomplished photographer and a nice guy.  He and Bob worked together for a while, in the mid-1980’s, at Modesto Junior College when Bob was still teaching photography.  It was really great getting together again.

After 3 daze of debauchery in fabulous Bullhead City, we departed, headed up the l-o-o-o-o-ng pull to I-40, Williams and then the 60-mile drive due-north to the Grand Canyon.  Near the top on the long hill out of Bullhead City, our ‘check engine’ light came on.  Since this had happened once before, we were not too alarmed.  We called the Dodge dealer in Prescott and got a service appointment later in the week.  (More on that later.)

We stayed in Trailer Village (what a creative name for a national park campground, ay?)  Sort of a flat-track, with a fair number of  trees and full hookups.  As soon as we got there, Dee Dee took Marshall Dylan, the cat, out for a walk.  Almost immediately, they were visited by Heckle and Jeckle, two of the resident Ravens.  Very smart birds…very smart.  One of them, we think it was Heckle, immediately started taunting the cat, landing 2-3 feet in front of him, hopping around, chortling in Raven-Speak, sideling up to him, and then jumping out of the way – in a carefully-planned nick-of-time dance.  This went on for about 20 minutes, each time both of them getting progressively closer to the other.  What a hoot!  Finally they both got bored and went their separate ways.

It was not as cold as we anticipated, with days in the 40’s and nights in the low 30’s/high 20’s.  Bob got set back a bit by the altitude (about 7500’), but after about 48 hours acclimation begin set it.  Just like the last time we were there, we used the NPS provided free propane-powered buses to get around the South Rim.  The entire loop takes about 60 minutes with frequent, convenient, stops.  We rode it 7-8 times while we were there.

The nice part about visiting the Grand Canyon after Thanksgiving is the distinct lack of crowds.  There were people, but not many; mainly Asians, French and Germans.  Lot’s of ‘selfies’ (jeesh, I hate that obnoxious term) being taken with iPhones stuck on the ends off long poles.  No waiting for anything.  Minimal rudeness (me included.) Viewpoints were uncrowded, as were restaurants, shops and roadways.   Made for a low-stress and pleasurable experience.  Another thing we noticed was the Xantera employees (Xantera is the GC NPS park concessionaire.)  There were all super-friendly and actually seemed to really enjoy their jobs.  The same held for all the NPS employees we met.  Great folks…very much unlike those in Death Valley, where moral was low and many (but not all) employees seem to be suffering through the day.  We love Death Valley…it’s a good thing you do not have to cross paths with staff that often.  (One exception in Death Valley was the golf course pro-shop manager…he was a good guy.)   OK, enough ranting…

OK…here is the ASTOUNDING PART! 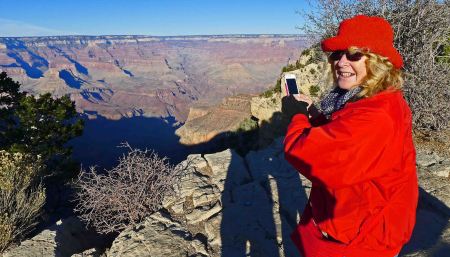 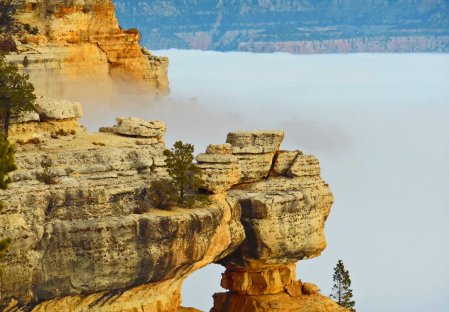 An amazing weather phenomenon turned the Grand Canyon into an ocean of ebbing and flowing cloud cover on Thursday, December 11.  This rare scene was caused by a temperature inversion, which involves cold air filling the Canyon while warm air lies above it, trapping the fog in place – since the denser cold air hugs the ground. 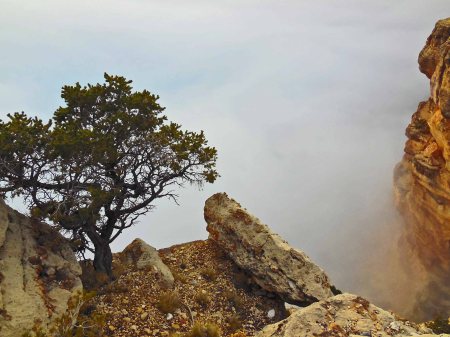 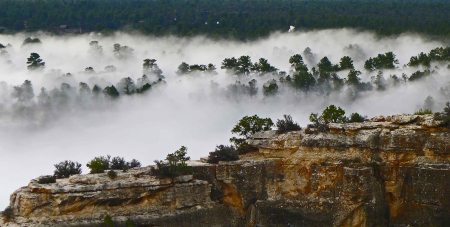 The result is a layer of low-lying clouds that produced a spectacular view that the turned the Canyon into a literal slowly moving sea of clouds that lapped the edges, filling the entire length and breadth to the brim, with only a small portion of the upper walls visible. 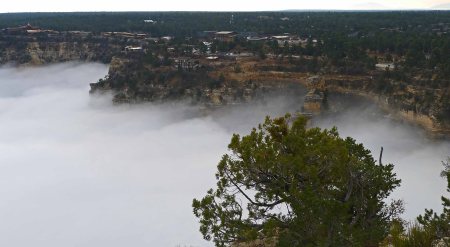 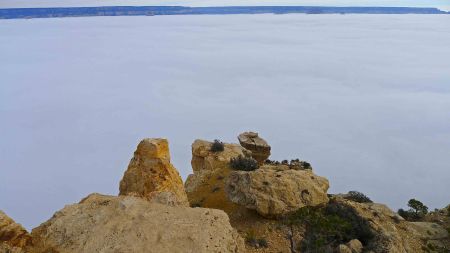 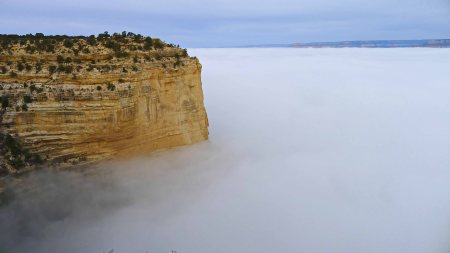 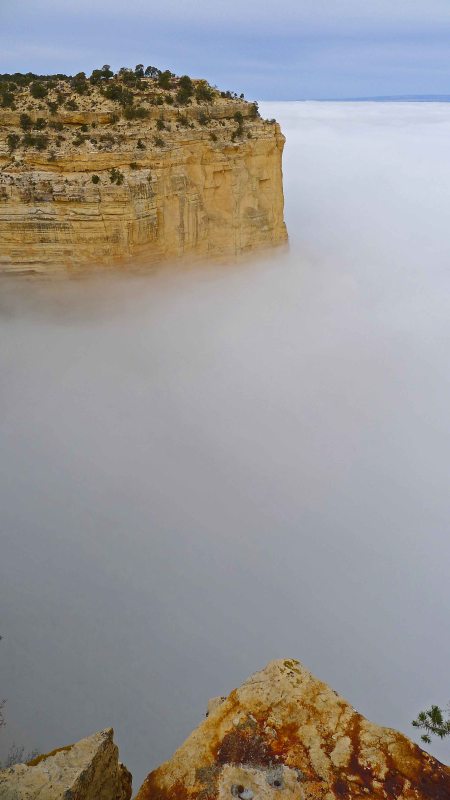 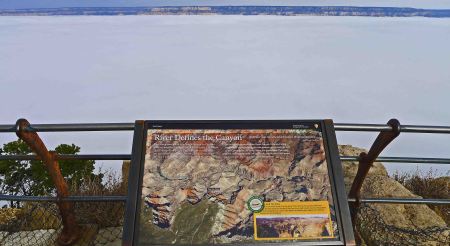 Canyon view, off of Hermit’s Rest Road, GC South Rim. The sign in the foreground illustrates what you ‘should’ be seeing in the background 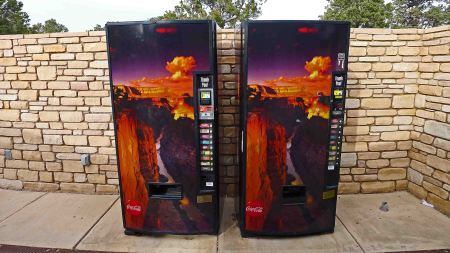 We saw quite a few tourists clustered around these Coke machines at the end of Hermit’s Rest Road, clamoring for a view of the ‘real’ Grand Canyon, during the cloud inversion

We were so very fortunate to be there for this infrequent event at the exact time it happened.  The day before, we were graced with clear and relatively haze-free views – those that most visitors enjoy.  But the next day, as we approached the edge about 8:30 in the morning, we had another one of those ‘Oh Shit!’ moments.  The view was beyond spectacular!  And it was something that tourists, such as us, rarely have the opportunity to savor.  As we drove out the Hermit’s Rest Road (closed to cars in summer, but open to private vehicles after December 1), we stopped at every opportunity.  Although we were blown away, it became apparent that many of those folks that we ran into on the paths and trails had absolutely no idea of the rare sight presented to them.   More than once we heard complaining about ‘all the clouds that were blocking the view.’  Whine, whine, whine!  We spent about 3 hours trying to absorb it all, and then headed back for dinner.  By about 3 PM, it was all over, and only a few small clouds remained.  What a total rush. 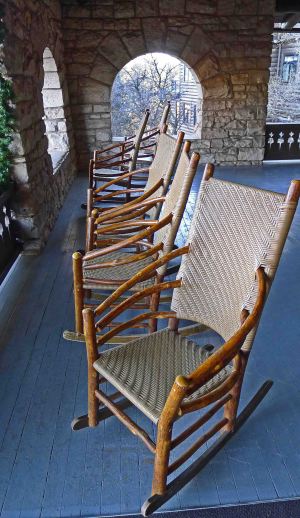 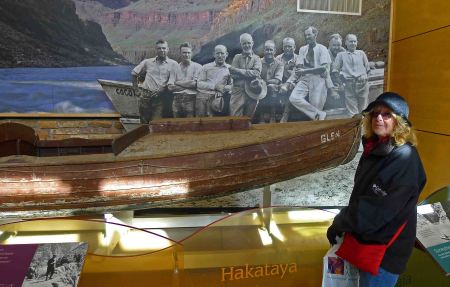 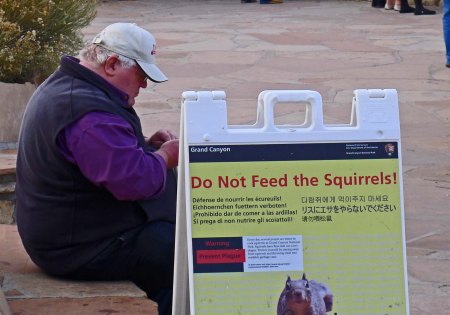 We left the Grand Canyon, content in have a truly memorable and enjoyable time, and headed for Prescott on Friday, December 12.  After we checked into Point of Rocks Campground – a place not to be missed if you are spending one night, or longer, in the area.  Google it.  You stay in the middle of spectacular rock formations, about mid-way between Prescott and Prescott Valley.  Very friendly staff and reasonably priced.  30 AMP service, WiFi only near the Registration Office.  Funky but pleasant.  We had a noon appointment for our truck to be checked out at York Dodge/Chrysler/Jeep.  We cannot say enough good things about these folks.  Friendly, courteous and they got us in and out in about 3 hours.  Jake, our Service Advisor, was originally from Temecula, so we had a common ground.  He was a great guy…and we got out of there for $0.00, since repairs were covered under our extended warranty.  For the first 55K miles, this 1-ton diesel pick-up has been virtually trouble free (knock on wood.)

While waiting for our truck to be checked out (it just need to have some ROM re-flashed to new factory specs), we enjoyed a great lunch with some old San Francisco Bay Area fellow boating friends, Russ and Donna Sherwin.  Had a great time and we discussed a (non-mutual) possible trip to Alaska, maybe sometime in the coming 1-2 years.  They had just returned and were totally jazzed.

Prescott is a great town, with lots to do and see.  We plan to be here a few more days, mainly visiting with some really good old friends, Debbie and Gary Paulsen (and their bird, Pepper.)  This post is being made just before we will be sitting down for a post-Thanksgiving/pre-Christmas turkey dinner.  More on that, with some photographs of the Point of Rocks area and musings about our stay at the Lost Dutchman State Park near Apache Junction.

Try to contain your excitement…