Incredible trumpet player at Waterfront Park, near the French Quarter

They are all New Orleans, Louisiana.  An incredible, fun, amazing, delightful, friendly, historical city.  Visiting here for the first time and trying to see the sights is akin to trying to drink out of a fire hydrant.  And if you have ever been here, you know exactly what we mean.

When we last left you, we had just arrived and checked into the Pontchartrain Landing RV Park, located on a canal, near Lake Pontchartrain, that connects the Lake to the Mississippi River.  It’s a nice place, fairly high class (meaning pricey), with lots of nice amenities, such a restaurant (of sorts) a huge dog park (so Charlie is happy), a pretty good bar and garbage pick-up at your site.   We scored a great space on the canal, in front of a dock where lots of boats are berthed.  Nice atmosphere.  It’s a little weird getting into this place:  you drive through a light industrial area (mainly boat building and repair), over some really nasty roads – fairly typical of most of the streets and highways we encountered in the NOLA area.

One of the nice services of this RV Park is a shuttle bus they operate that, for $6, will drop you off  (and pick you up) near the corner of Toulouse and Decatur Streets in the French Quarter.  We had the same shuttle driver all three days.  Now those of you who know me will agree that I am a world-class bullshitter.  Well, our driver was the consummate PROFESSIONAL – he made me feel like a total amateur.  Although he was not a native of New Orleans, he did seem to know a fair amount stuff, and what he did not know, he just made up.  And, you could truly believe about 30% of what he said. 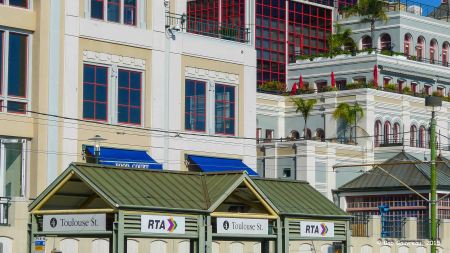 Newer buildings, on the River side of the French Quarter

Entrance to the French Market

Looking down Bourbon Street towards Canal Street and the downtown area

View of street in the French Quarter 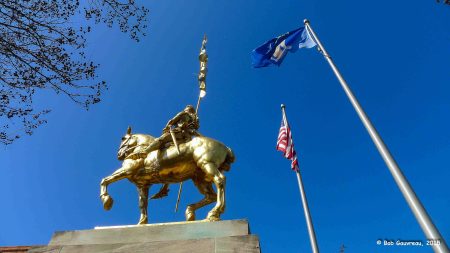 Dee Dee and the Meals-On-Wheels lady, near the Mississippi River Front and Jackson Square 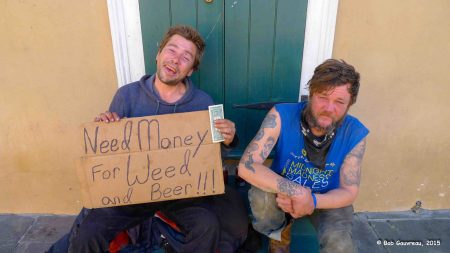 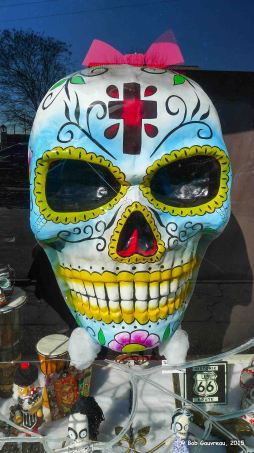 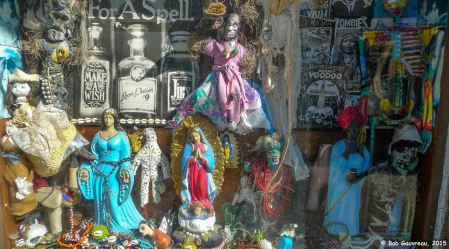 Dee Dee and her new friend, voodoo shop in the French quarter

Coffee and beignets at the Café Du Monde, French Quarter 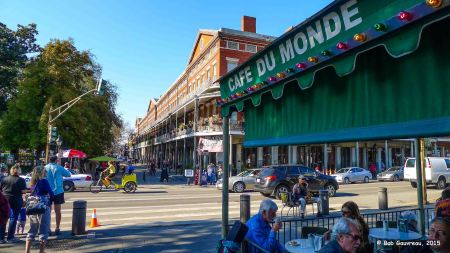 The food here is incredible!  Several people we met asked us to recommend good restaurants – well, they are ALL good.  And, we got good advice from others on good places to eat.   I am sure we both gained at least 10 pounds, dining on a variety of meals, such as muffuletta sandwiches, for instance.  A traditional style muffuletta sandwich consists of a muffuletta loaf split horizontally and covered with layers of marinated olive salad, mortadella, salami, mozzarella, ham, and provolone. The sandwich is heated to soften the provolone.  Totally delicious!  (We had these at the Napoleon House.)  We also started each day with sumptuous coffee and beignets at the famous Café du Monde , located near the French Market.  Let’s not leave out delicious stuffed mushrooms and baked oysters (we had these at the Royal Restaurant) and Po’ Boy sandwiches (at the Remoulade Resturant), too.  Everything was soooo good!  As far as drinks go, you definitely got a full-plus pour of whatever you ordered.

The Blacksmith Shop Bar, Bourbon Street; one of the oldest bars in the United States, serving drinks libations continuously for over 250 years. We had Bloody Mary’s here at 10:30 AM, and that was pretty much marked the end of the day…

The first day we were in the French Quarter, we went to a bar called ‘The Blacksmith,’ that was recommended by some folk we met.   It is one of the oldest bars in the United States and has been serving libations for over 250 years.  We had a Bloody Mary at about 10:30 AM and that pretty much destroyed the day…or made it better, depending on one’s perspective.  We had a few Hurricanes, a local drink composed of several varieties of rum; they will definitely kick your butt.  Let’s not leave out the local beer, either…lots of really great brews. 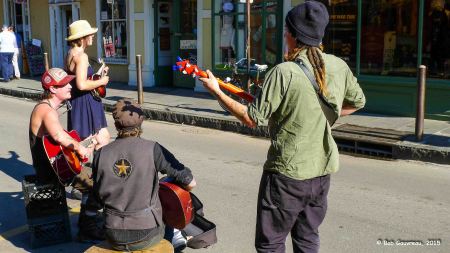 Almost everywhere you go there is great jazz and zydeco music…much of it right on the street.  The action starts everyday about noon and continues on into the evening.  And it’s really, really good stuff. 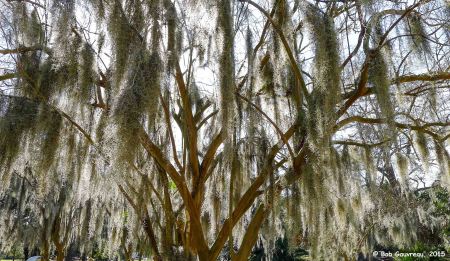 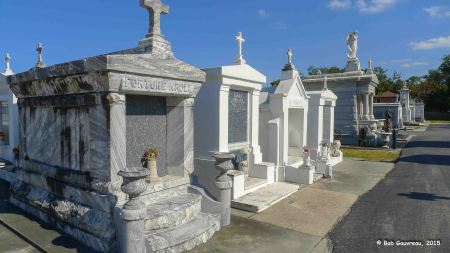 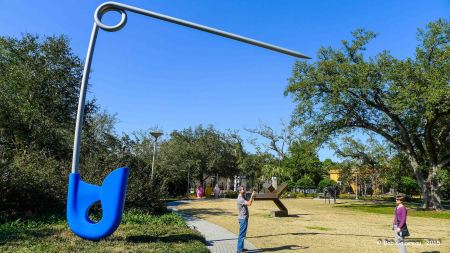 Although I am not much of ‘bus tour’ person, we did spend a few hours one day on a Grayline Tour bus, doing a ‘City-Wide’ tour that covered a majority of NOLA and the surrounding neighborhoods.  I have to admit it was worth the time, and we learned a lot about the history and culture of New Orleans.  We probably should have done it the first day we got there (we went the 4th day), as it really helped to put things into perspective.  And we had a great local guide who gave it an excellent personal touch.

All in all, we must get back to New Orleans again – very soon.  So far, it has been the very, very, VERY best place we have visited on this trip.  We saw a lot, but there is so much more to do.  Six days just did not give us enough time.

We were due to head out of The Big Easy on Friday, January 23, and head for Pensacola, Florida, but had to delay for a day due to some heavy rains and winds that have blanketed southern Louisiana, Alabama and Mississippi and part of the Florida Panhandle, for the last 36 hours.  So, we are off tomorrow, Saturday, instead.  Stay tuned for the next exciting episode…

Lonesome-The-Dog’s grave, Picacho Peak back country.
One of Jaime’s talented guys.
Blond women found wandering in desert around Yuma. Trump was right - they (murders and rapists) ARE covering their mouths with BLUE duct tape and selling them into human bondage.
Lavender, near Sequim, WA.